The first Thanksgiving celebration in North America took place in 1578 in Canada when English explorer, Martin Frobisher and his fleet of ships came to rest in Frobisher Bay after suffering through damaging ice and freak storms while in the search for the Northwest Passage. The group under the religious guidance of Mayster Wolfall celebrated communion as he delivered an impassioned sermon about “thankfulness to God for their strange and miraculous delivery in these so dangerous places”.  This was 43 years before the pilgrims landed at Plymouth Rock, Massachusetts.

For a few hundred years after, Thanksgiving was celebrated randomly from late October to early November, before it became declared as a national holiday in 1879 to be observed on November 6th.  Later it was moved to the Monday of the week in which November 11 (Armistice Day/Remembrance Day) occurred.  Finally  it was decided that these two celebrations should be at different times.

Since Thanksgiving, for Canadians, is more about giving thanks for the harvest season, and our harvesting generally ends by the 2nd week of October it made sense that in 1957, the Canadian Parliament announced that Thanksgiving would be celebrated on 2nd Monday in October.

Want more in depth info on the history of Canadian Thanksgiving

THANKSGIVING IS TIME FOR FAMILY

Thanksgiving is always a time for families to get together and enjoy their time together.  It’s the time to catch up on what everyone in the family have been doing after the busy summer season.  It’s also time for turkey and all the fixings and to be thankful for our family being together and the things that make us grateful to be alive.

If you aren’t into turkey and want a more vegan celebration here are some recipes to start your celebration.

With your whole multi-generational family gathered around to celebrate and the kids are running amuck, how about some fun things you can all do together

Thanksgiving just isn’t Thanksgiving without PUMPKIN PIE.  My family raves about my pumpkin pie and it’s so simple but absolutely delish. 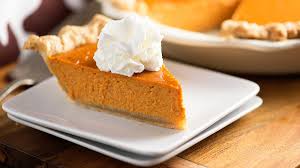 Whisk or beat the first 7 ingredients together until smooth.  Pour into crust.

Not a pumpkin pie fan, check out these Thanksgiving desserts

"Our family is thrilled with the Fantasy Swing Set.  Brent was very helpful in the planning stages and was able to map out the perfect playground location for our cottage backyard.  It was so easy to customize the accessories that made sense for our family members. Aden was so careful…"